Give them an inch and they’ll take a mile

The challenge is a small .NET PE binary.

Running the executable we can see that it can be run: 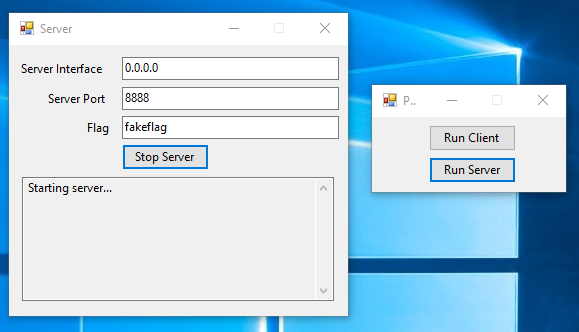 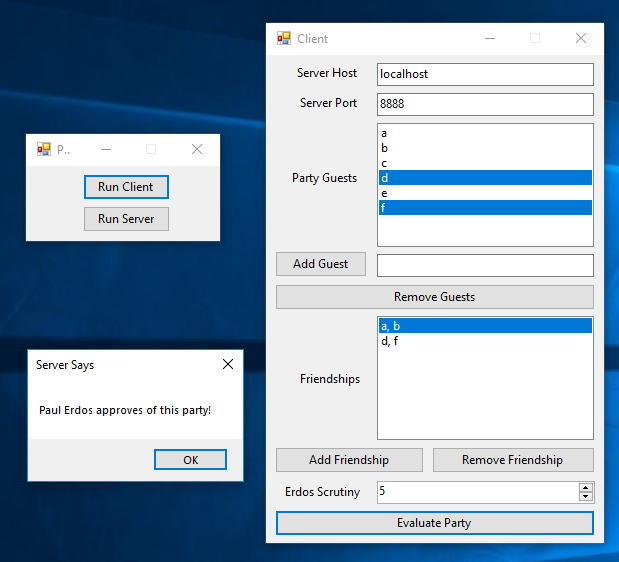 The user interface lets you define a list of “party guests”, a list of “friendships” between them, and some “Erdos Scrutiny” parameter. By clicking on “Evaluate Party” the parameters are sent to the server and evaluated according to some unknown criteria. The server replies saying if Paul Erdos either approves or disapproves of the party.

Since there isn’t any obvious way to interact with the flag from the client, we’d better look at the insides of the program.

We decompiled the binary to better understand how the client communicates with the server.

Here is the decompiled source: ClientThread.cs.

We found out that there are actually three different type of messages which the server accepts, depending on the first number sent to the socket:

This service takes a number of strings, one per line, and for each checks if the string is equal to the flag. The service then replies with “Correct” or “Incorrect” for each of the strings supplied.

As it is, this service is not very useful for us. Since the check is made on the whole flag, the only way we have to find the flag would be to fully bruteforce it, which is unfeasible.

Looking at the code though we can see that this is the only section of code where the flag is used. We are therefore forced to find some way to make use of it, or somehow leak the information elsewhere.

After looking at the code some more, we noticed that the comm buffer is used by both the flag check service and the erdos approval service. There might exist some way for some information related to the flag to leak from the other service, as long as:

The flag check is computed with the following code:

We can see that the result of string.Compare (a 4-byte integer) is stored in comm, and therefore the first condition is satisfied.

Note: the result of the call is positive or negative depending on which of the two arguments would come first in the lexicographic order. This means that if we manage to leak the content of comm, we could setup a binary search using the result of the Compare as a discriminator, and find the flag byte by byte.

Long story short, this service does the following:

In this section of the program comm is used to store the edges of the graph, represented as single bits: 1 if the edge exists, 0 if it doesn’t.

The following lines of codes are the ones supposed to zero out all the bytes needed to store the edges.

The code makes sense (each node can have an edge with nodes - 1 other nodes, the total number is divided by 2 since the graph is undirected), but it’s actually flawed: the division by 8 truncates the result, and prevents the last needed byte from being zeroed out.

This means any previous usage of comm can affect the representation of the graph edges, or, in other words, the content of comm can “add edges” to the graph. For instance if some bits in that last byte were left to 1 from previous usages, the code would believe that the edges corresponding to those bits exist in the graph.

The immediate consequence is that the result of the erdos approval computation can also change depending from previous usages of comm.

This takes care of the second and third conditions we laid out previously, and prove that an attack is possible.

We now need to find some reliable way to guess the content of that leftover byte using the erdos approval check.

We’re interested in the sign of the string.Compare result, i.e. if the integer was positive or negative.

The integer is stored in comm as 4 bytes, in little-endian order, and, being signed, it probably uses the two’s complement representation.

With some tests we noticed that the absolute value of the result of string.Compare doesn’t go over 2 bytes. This mean that, using two’s complement:

Since the integer is saved in litte-endian order, the most significant byte is the 4th.

The 4th byte can only assume two different values, and the erdos approval too: with the correct setup, there might be a way to reliably recover the sign of the result from a single erdos approval check.

Looking back at the comm zeroing out snippet:

One of the values that fulfill this condition is 6 (among many others).

Depending on the result of the string.Compare call:

We can therefore find the value of the 4th byte and the sign of the comparison with the flag.

We have everything we need. We can now setup a binary search by adding a character at a time to our input and checking if the result of the compare is positive or negative.